The reports we reviewed

In or Out? The Housing Needs of Older LGBT People in Birmingham (2016), Stonewall Housing/Birmingham LGBT

Based on a survey of 101 older LGBT people. Found majority preference for LGBT specific accommodation, and access to LGBT specialist care and support services.

Aims to assist commissioners to respond to their duty under the Health and Social Care Act 2012 for NHS England and CCGs to reduce health inequalities and promote integration between services for an often marginalised community. Includes survey of 250 LGBT service users and carers. Highlights problems caused by overall lack of monitoring. Focus on care and support rather than housing. All references in report to housing relate to Stonewall Housing.

Not specific about older people’s needs and experiences. Strong advocate for monitoring especially as part of user feedback.

Building a Sense of Community: including LGBT in the way we develop and deliver housing with care (2013), Tina Wathern (Stonewall Housing) : Housing Learning Improvement Network Viewpoint 39

Improving the housing and care experiences of LGBT people in later life (2013), Housing 21

Research into needs and aspirations of older LGBT people and proposal for how Housing 21 can make a positive impact.

Summary of older LGBT views and experience on ageing.

Survey of 1,050 heterosexual and 1,035 LGB people over 55. LGB more likely to be single, to live alone. Less likely to have children, less likely to see biological family members on a regular basis. More likely to drink often, to take drugs, or have a history of metal ill health, depression of anxiety. Twice as likely to rely on external services for health, social care and support. LGB people not confident that service providers, including housing understand their needs.

Working with older lesbian, gay and bisexual people: A guide for care and support services (2011), Stonewall

Practical advice to organisations providing care and support services about how to meet the needs of lesbian, gay and bisexual people.

The Whole of Me: meeting the needs of older gay men, lesbians and bisexuals living in care homes and extra care housing (2006), Sally Knocker : Age Concern

Survey of 131 older lesbians and gay men. Need housing and social care to be considered together. Appetite for specific lesbian and gay housing provision. Need for information/advice for older people. Need for training for service providers in relation to older lesbian and gay people. Need to address potential loneliness and isolation. Organisations and individuals to share information. Older lesbians and gay men should be closely involved in any developments. 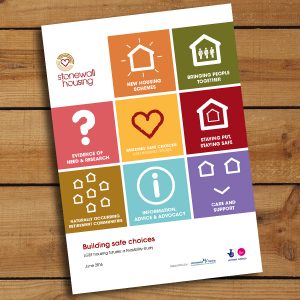 Our ambition and our recommendations. END_OF_DOCUMENT_TOKEN_TO_BE_REPLACED

The importance of equalities monitoring. END_OF_DOCUMENT_TOKEN_TO_BE_REPLACED

The three schemes we visited in the USA. END_OF_DOCUMENT_TOKEN_TO_BE_REPLACED

How the Equality Act works for you END_OF_DOCUMENT_TOKEN_TO_BE_REPLACED